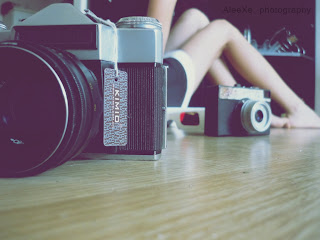 This is the continuation of Alex and Kayla's story.  It picks up from when we last saw them in Life.

Kayla's backdrop, as she stood, relaxed and graceful, wrapped in white, her black Canon Rebel XS in her hand.  She rested it on her shoulder, leaning her cheek against the lens that pointed towards him.

Her beautiful skin shone smooth milk chocolate.  Her brown eyes gazed lovingly at him.  A light wind lifted a lock of light brown hair and held it still in the air for a moment before releasing.

Her soft, flowy top fluttered around her like fragile butterfly wings.  Boho chic.  She held his gazed as she straightened up.

He was her subject while she dabbled in this new love.   The only one allowed to photograph him free of charge, much to his manager's chagrin.

He blushed and stood tall, posturing in fake sexiness.

"I've got 5 minutes, lady and then I'm needed back on set," he growled, a smile on his face.

Her laughter echoed through him, sending waves of pleasure.

Standing tall as a sentinel, she aimed her black Canon at him, one brown hand adjusting the lens.

Alex opened his eyes and slowly turned his head, which still laid on Kayla's hand.

Reality - he thought as Kayla laid in the hospital bed.

She was still in the coma.  She looked peaceful - her eyes still closed.    It'd been two weeks since he heard her voice.    The doctors were still unsure but hopeful.  His agent was pressuring him to return to work.  He needed too.  He was under contract.  But he couldn't leave her.

Tears pushed forth from behind his eyes.  Stinging liquid down his cheeks.

He kissed her hand softly and laid his head down on it again.  He closed his eyes, reaching again for that memory.

This piece is inspired by a prompt from The Red Dress Club which asks to write a short fiction or non-fiction piece inspired by any or all of the photo above. Word limit: 400 words