Chelsea "George" Bates is an almost 15 pound gray striped Calico cat who's length (when stretched out) is longer than my 10 month old and who's width about rivals that of the same 10 month old. And though my 10 month old is in the 25th percentile for babies in his age group, he is not by any means small. Nor is said cat. She is 'George' because our oldest son recently felt like she needed a middle name. 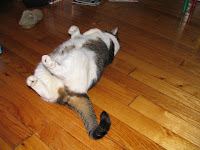 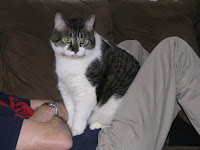 We've had Chelsea for almost 9 years. She was our first "baby" acquired a year after hubby and I got married. I convinced him over IM Chat to have us take her. One of our good friends - her 'mother" needed to give her away because she was moving in with a roommate who was deathly afraid of cats. It was a moment of weakness for him. Not only did I blindside him over IM while he was at work, I threw in the "she would get rid of our mouse problem in our apartment" reason. A pause - he relented- and I quickly disconnected from Chat so that even if he had second thoughts, he couldn't respond.


So we took in our first baby. The baby who was skittish of men and very temperamental. "The 'I love you, I hate you' type of temperamental. It took her a month to even walk up to the hubby and we had to show our friends who came in to care for her while we were away on our first anniversary trip a lot of love, because she had been a major pill to them while we were gone -- hissing, scratching, swiping at their legs. And so this personality of hers continued throughout the years.


Affectionately nicknamed "Psycho Kitty" due to her previous rep, she settled in with us and became ours. And even when we moved from our NYC apartment to New Jersey, and had the opportunity to give away the psycho, overeating, oversensitive, needy feline, we ended up bringing her with us. She sat in between our two friends in the U-Haul truck hissing and yowling all the way from Manhattan to Central New Jersey. She continued to be with us as we welcomed into the world our first son, as we moved to Pennsylvania a year later, as we had our second son a couple of years later and then moved out to Boulder, CO, four weeks after second son's birth. She rode with us in the packed car -- in her carrier in the front seat surrounded by our "stuff" as we drove through 100 degree heat across country. And after three more years of her intense attitude and neediness, she is still with us.

You know, what would we change about our cat that is constantly in the dog house because of some pee or poop incident? Though she drives us totally insane and we really feel like we want to give her away just about every other day, I realize that there isn't really anything I would change about our constant (now-neglected due to three little boys) companion - our first baby - our gorgeous household accessory.


Except...maybe her appetite. I mean really, I literally have four constant hungry mouths to feed. It's never ending...

* This post was in response to a prompt from Mama Kat’s Writer’s Workshop: if you could change anything about your pet, what would it be?
Posted by Melanie at 4:57 PM

Email ThisBlogThis!Share to TwitterShare to FacebookShare to Pinterest
Labels: Chelsea