Things That This Bronx Girl Holds Dear, Or More Specifically, Can't Get Out of Her System 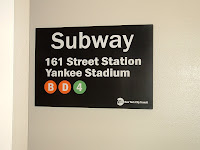 I have to confess. The subway sign in the photo is in my home in Boulder, Colorado. It's hanging on the wall in the little mini hallway between the boys' bedrooms.
No, I didn't steal it. I bought it for a nominal price at the Target Store in Boulder. Yes, Boulder, Colorado of all places. It was one of a kind - stashed in between two other works of art - one depicting Wrigley Field in Chicago and some other baseball stadium I can't recall in the moment. Okay, actually I can: Fenway Park in Boston.
That precious piece in the photo. My Subway Art. It actually is art. A painted replica of a symbol that I hold dear from my past life growing up in the Bronx.
I spotted it by accident when I was flipping through canvases. When I saw it, my heart started racing and I became giddy all over. The same reaction some people would have seeing their favorite celebrity in person. This familiar symbol from my past was staring back at me in all its gloriousness. You see, I used to pass that specific subway sign (s) growing up in the Bronx. Often without thought as I rushed down the stairs and into the subway station on 161st street and River Ave. Not only coming from several Yankee games, but from friends' houses, from the Bronx County Courthouse where I was summoned for jury duty, from the public pool a couple of blocks over from Yankee stadium or from the big movie theater with the stadium seating. Or most frequently, when I was transferring trains, going from the D train to the #4 train. The sign became a part of my existence. The same D and #4 trains were the trains I was most familiar with because they stopped at the subway stops near my home. The road (railroad, that is) that led to home everyday was past 161st and Yankee Stadium.
This sign said "home" to me. For others, it might be an ice cream shop that they used to visit while growing up or a park of some kind that was played in frequently. For me, it was this subway sign.
So, in all my giddiness that day, I ran out to the car that my husband was waiting in with the kids and sent him into Target to look at it. I wanted him to spend his hard earned money on that sign. Where else was I going to find something that so represented home to me in a place such as this, the Mountain West?
I saw the discovery of this sign at Target as a beacon of encouragement. An actual kiss from God. That I would find something so familiar in this different place I had moved to. It's not like I'd find the subway sign from 161st in the Bronx in stores wherever I went. I was a happy girl that day.
It's fun to see people's reactions when they see it hanging on our wall. From"Really? A subway sign?" (in other words: "that's not art") to "How cool! Did you steal it and bring it back with you from New York?" to "So sweet of you to get that for your boys."
Yes, a subway sign and no, really, I didn't steal it.
And it's all mine's (okay, the rest of the family's, too)...my precious work of art.
Posted by Melanie at 4:10 AM

Email ThisBlogThis!Share to TwitterShare to FacebookShare to Pinterest
Labels: subway