What's In My Backyard?? 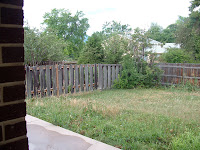 Two Saturdays ago, I decided to help my hubby by going out to our backyard and cutting down our extremely tall weeds. It was the first time this Bronx girl has used a weed cutter and I was brandishing it back and forth, knocking down weeds left and right. As I worked in the hot sun, I thought about how therapeutic this was for me. It allowed me to let my thoughts wander without interuption from little hands and big screams.

I thought to myself. Here I am surrounded by green stuff. Nature. Grass and weeds and dandelions. I grew up in a concrete jungle of sorts. The backyard to my house growing up in the Bronx was made up of mostly concrete with weeds growing through the cracks. The parks near to my house were mostly playgrounds with a tree or two growing in them surrounded by massive concrete. So walking among grass and trees or even being surrounded by grass, bushes and trees only occurred when I visited the big parks in the city: Van Cortlandt, Pelham Bay, Central Park.

Since my exposure was limited, foilage was somewhat foreign to me. I would wander among the grass and bushes and wonder what was there. Poison Ivy was definitely the main enemy. I can recall several times when classmates would end up in an endless state of itching because they had wandered into a patch of poison ivy. Poop in various forms (i.e. dog, goose, rodent) was enemy #2.

Even now, when I go out to the backyard I wonder what's within those weeds and thick grasses. Poop? Something worse? And what are those leaves? And are they poisonous? Or worse, are they poison ivy or poison oak?

When my boys run through the grass, I have to force my voice to be still since I am so tempted to yell..."Watch where you're running!" or "Be Careful where you step!" In my own backyard.

When we go to the grassy park two doors down from our house, I'm constantly on watch for the  hidden dog poop and something else icky that I don't have a name for.

I have to confess, I'm more at home walking on the concrete sidewalks here in downtown Boulder, than in the plains and grasses of rural Boulder where I live. I barely check where the boys step when we're on the sidewalks, unless they're stepping off the sidewalk and into the street. Then it's a quick warning to them to get back on the sidewalk where it is safe.
Safe.

Sidewalks. Concrete equals safety to me. Grass, weeds, plains equals mystery. The great unknown for my feet. You can't see what's in grass sometimes. You can see practically everything on the sidewalk. Even the stuff you don't want to see. Memories of me in the back in New York City sidestepping the grimy gobs of dirty pink bubblegum, the remnants of someone's leftover pizza, the dark, unrecognizable gooey spots stuck to the sidewalk enter into my brain in the moment.  Gross, yes but familiar. Safe.

So there I am on that Saturday, brandishing the weed cutter. Chuckling about my paranoia of all things grassy and weedy when I look down and see within the tall weeds a dead animal face looking up at me.  Of course, I scream and run away from the thick mass, leaving the cutter on the ground. I'm breathing heavy. This is so not cool. Not cool at all as I stand there taking in big gulps of air and shaking. I look towards the closed patio door.  No one's there.  My family did not hear my piercing scream and are oblivious to my fright.  I look around to the other backyards surrounding mines.  Hopefully my neighbors were just as oblivious as I was just beginning to feel a little foolish.
After a minute, I shake my head and take off  hubby's garden gloves. I walk towards the house. I'm done for the day. I'm completely done with that overgrown weed patch. What else would I find if I continued?
Minutes later my hubby who grew up surrounded by nature in the Pacific Northwest and has much more exposure to green grassy things and trees nods his head in sympathy. I don't have to touch that weed patch again. I could attempt the weeds in the front. I nod and shake my head. I could. Okay. I grab the weed cutter and head towards the front of the house with determination.

I find after a few swipes at the tall weeds by the side of the house, I can't continue on any further, the image of the dead animal still in my head. So I head back to my concrete porch.
Where it's safe.
Maybe I'll tackle our overgrown yard another time. Then maybe not.

Email ThisBlogThis!Share to TwitterShare to FacebookShare to Pinterest
Labels: backyard