Butterscotch Babies:There's Beauty in the Mix 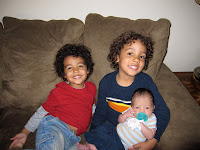 I sit and watch my sons play. The oldest, my 5 year old is pushing a toy car transporter around while my second son, who is 3 is putting plastic vegatables into a sand bucket with a toy shovel. Meanwhile my youngest who is 4 and 1/2 months is playing with a cloth book. As I watch, my mind wanders back to a time over a decade ago when I was visiting Denver, Colorado for the first time. I was standing with my friends after a church service, and across the way I saw a girl of about ten years old talking and laughing with her sister. She had skin the color of butterscotch candy, light brown fine wavy hair and light colored eyes. She was gorgeous. During the moment while I stared, something inside me stirred and thought, I'm going to have children that look like her one day.

How did I know? There wasn't any physical evidence pointing towards that fact. I wasn't dating anyone at the time and I was (and still am, of course) an African-American woman with dark brown skin the color of milk chocolate, loose coarse wavy hair (when not chemically straightened) and dark brown eyes. But something within me told me that the possibility was pretty strong.

Now I'm not claiming to be psychic. Far from that especially since I believe that there is a God and he is the higher power and has his hands in all things, most especially the aspects of my life. But here it is years later, and I'm staring at three little boys who resemble that girl I saw years ago.

Yes, I have my own butterscotch babies now (having married a man who is Caucasian). Apparently and ironically it was part of the Master Plan that is my life.

It was very clear that this girl of years ago who was stunningly beautiful was a product of an interracial coupling. I just remember thinking that she was beautiful because she was a blend of two overt races (white/black) and possibly a few covert ones. With a mix, came beauty.

I look at my own and see beauty too. Not in the sense of them being more beautiful than other children but just in the sense of how they were created - with their own unique set of features: my oldest with skin the color of butterscotch candy, light brown loose curly hair and eyes the color of caramel. (Pardon the candy references.) My middle with the same skin complexion as his brother yet with darker hair with tighter curls and eyes the same caramel color as his brother. Yet his eyes appear lighter because of his dark hair. And my youngest, who has slightly lighter skin than his brothers with brown hair (straight for now) and gray colored eyes. What makes each of them individual makes them beautiful.

I believe the same applies to children with parents who are of the same race. Unique features from each parent are passed onto the child to create one beautifully blended individual. A combination of distinct features joined together makes each child lovely in their own right.

And to think there is so much prejudice in the world with all this beauty around.

Which all the more convinces me that what makes people ugly is due mainly to what we look like on the inside and not out.

Right now my two older butterscotch babies are playing well together creating their own race car world while their younger brother sleeps on my shoulder. There's peace in our world...