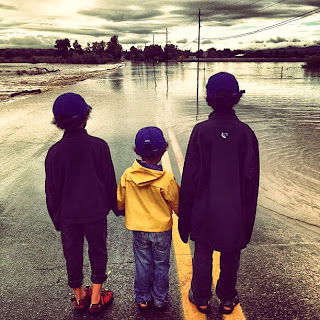 From Wednesday, September 11th to Friday September 13th, Boulder County along with other counties in Colorado experience heavy rain storms which lead to massive flooding all over the city of Boulder, including our neighborhood.

Friends and neighbors experienced major flooding in their basements and crawlspaces up to a foot and 1/2 high.  Roads were washed out and schools were closed.

Above is a picture of our main road which was flooded.  To my boys' amazement, their road of 75th - a road we drive on at least 4-5 times a day, to get out of our neighborhood and go to other parts of Boulder - became a river as water flowed from the creek beside it.  A creek that swelled to about four times its size and became a rushing mass of murky water.

Over the road and onto the acres of land that run beside this main road.  As far as the eye could see covering over land that animals used to graze on.

Colorado is a dry place usually with little rain.  That changed in a matter of hours.

Boulder and parts of Northern and Eastern Colorado haven't seen flooding like this in about 1,000 years they're saying.  And probably won't for another 1,000.  Ironically, we are a part of history.

This photo above of our three boys standing in front of our road  - my husband took, speaks volumes.

I sent it to CNN/iReport and they posted it with a news note because this photo does really does say it all.   For several days, Boulder and the counties north and east, especially those in the mountains and in the Eastern plains were covered and  surrounded by water - roads washed out, homes damaged, people stranded.

We feel spared and blessed.  We had limited mobility due to flooded roads,  our basement sustained a little damage with water, but we are fine.  Our school too but it too has been cleaned up and the grounds are drying out.  Other schools didn't have it so lucky.

So over a week later, Boulder is in recovery mode - drying out - though some of our friends who live in the mountains are displaced - they won't be able to go back to their homes for about 9 months to a year which is when the county is expecting the roads to be repaired.   They are living and renting down here - starting life over, literally.

It's like that here.  A sense of disorientation and disruption in our lives for a week because of the floods and now life starting over again now that the floods are gone.  Getting back to normal - a new normal, for a lot of folks.

School is open again and soon the boys will be able to have their soccer games again - the fields are drying out.

The sun is out nowadays - bright and shining - but as I drive I still see the residual from the floods -- small ponds and lakes in the middle of fields where there weren't any before and lots of mud and dirt across and on the side of roads where the water once covered it.   Homes with murky pools of water still standing in their front yards.

This back to Normal - this New Normal for some - it will take time.