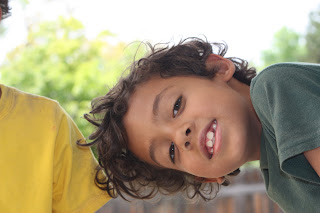 He's into building and creating - right now he wants to work on the town he is building with Legos and blocks and cardboard and Playmobil sets.  There will soon be a soccer stadium built there.  He's super- excited about that.

He wants to make bead necklaces and sell them or open up a lemonade stand (his own doing, trust me) and sell lemonade to his friends.  He's all ready to make invitations with directions to help his friends get to his house.

Yet, with his grand ideas, he's still a social being.  He wants to be a part of a group of friends.  He misses having a BFF (had one briefly in his 1st year of preschool, none since).

He tries to blend in, and a lot of times is not the most successful.  The kids have kept him out of things because he has his own way of doing things, seeing things.  And he's passionate about his views.

He's not that into superheroes or Star Wars or the latest kid trend.

He even tries to be a part of a group by trying to like the same things the other kids like.   He makes an effort and gets a little interested, but truth be told, he's not super passionate about it so he walks away.  It just doesn't hold his interest.

So he tries to be a part by imitating silly behavior and doing goofy things.  Being a class clown because, you know, class clowns are funny and charming and accepted by kids.

I see this and it makes me cringe, because the silly, goofy things are not always the best behavior.

I have to admit though that there were times when I cringed when I noticed he wasn't readily accepted by other kids.

Times in my heart where I just wanted him to blend in better with the other kids, like what they like so they could bring him into their group.

But over the last year, my conscience has protested more often than once and asked "Why?  Why does he have to blend in? Why does he need to like the same things other kids are into?"

The conscience continues to protest: "Be a little more relatable yes, but be or do exactly what the other kids are doing, no...just so he can be liked and have friends?"


When your own beat is to a different drummer it's hard.

Standing out from the crowd becomes the norm when your beat is different.

Not being accepted by the majority is common when your beat is different.

Life is a little more challenging socially when your beat is different.

You are alone a lot when your beat is different.


When I started this blog, it was because I loved the idea of chronicling my life, my family's life, especially for the kids so that as they got older they could go back and read about what was happening during these early years.

In chronicling the moments of our lives, I didn't realize that I would end up writing about the adversity that my child has faced because he is unique from the pack.  I didn't even realize this would be a factor I would have to deal with so soon in his preschool years.

So, for me, it's become unexpectedly personal as I watch my kids and others kids grow and interact with their peers in this world.  Having your own unique beat is something to appreciated, loved, nurtured and cherished, especially in this crazy, trendy, patterned world.

I speak for those who walk to their own, unique beat.  Will continue to speak, almost reluctantly at times  because it's not an easy topic to give voice to, but a necessary one.


Walking to your own beat when it's that of a different drummer.

Not a bad thing.

Definitely not a thing to be pushed aside or squashed.

But to be celebrated, understood and embraced.

It makes us who we are.


Joining in with two awesome blog friends, Nicole and Galit who are hosting a Lorax-based link up this week, asking us to share for whom or what we speak.  Because we all speak for something.

The Lorax speaks for the trees.  Who do you speak for?